Everyone has a past. Everyone makes mistakes. Everyone wonders why they chose to act one way versus the other. It’s no secret that we are all humans, but it is what you make of those mistakes that make you who you are.

My past is questionable. But, here’s the thing, I can’t change it. No matter what I do and how hard I try I can’t forget it. There is no way for me to erase it or edit out certain parts of it. The only thing that I can do is accept it. Now that is harder to do compared to just saying it. But, I’ve been told it can be done. Accept the past as a chapter in your life that helped mold you into the you who you want to be.

A friend sent me something that hit home. I’ve been a bit emotional lately because of my past that what she sent I took it to heart as confirmation that as screwed up as I am I can still be someone. Now, dear friend, I don’t know if you meant it for me, a lot of times we just send each other pictures because #realtalk, but thank you. This is what was sent… 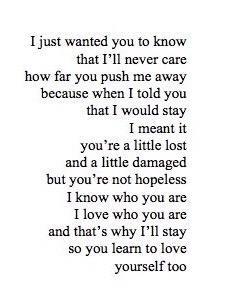 It is time to take back that hope. I don’t have to be the shell of myself that I allow others to see. My damaged, scarlet past can’t rule my world unless I let it. I work hard for everything that I have. Push myself to the limits to be great. Push myself to be strong. Independent. It is time to be my own Sappho, my own Eleanor Roosevelt, my own Joan of Arc. I need to grasp my scarlet past and say thank you for making me who I am. Accept it and let it go, move on. Learn to love all that I was and am.

Look, I’m not trying to alter your mind. I mean if you choose to take anything I say today and grow I’m incredibly happy and honored I could help you. But, I think today I needed to put it in the universe that there is a way out. I don’t have to be held in the dark.

cheering on, depression, do you, feels, get it all out, inspiration, strong woman, success