I’ve made thousands of wishes in the last year. None more important than fixing the brokenness within me. And this past Labor Day weekend was an incredible wishes do come true feeling.

I dubbed the weekend 2nd Honeymoon. Mainly because my husband and I have not gone on a trip alone since our first – 12 years ago. But, also because after the two years we’ve been through it was as if we were having a honeymoon – a time away to be, to enjoy each other’s company, to learn and come together as one.

The drive to Spokane took almost six hours. I slept most of the way. I made a joke about how I need car rides to get me to sleep since I haven’t been sleeping. Maybe I just needed a long car ride to get me back to a routine. Since the Friday car ride I’ve successfully been sleeping pretty much through the night. I had one night where nightmares terrorized me but a friend’s cat gif made me laugh hard enough to calm down and sleep.

I hadn’t been to Spokane in 25+ years. Everyone told me that it grew a lot more since then. Well the construction throughout downtown proved it. When we arrived we were way too early to check in so we took to foot and explored the town.

Carrie Underwood’s concert was what spawned the idea of our 2nd honeymoon. Then oddly enough we saw a bus at the Historic Davenport Hotel. Hmmmm…I wonder.

There was also a festival going on at Riverfront Park. Pig Out Fest. No joke. Honest name of the festival. We took a stroll down there and we found a plethora of crazy good food and some not so good food. We literally had Hawaiian, Asian, Southern, Russian, Mediterranean, American, Fair food, Dessert stands – you name it it was there. It was crazy the amount of food available to us. My favorite food cart? The corn on the cob stand. They grilled the corn to softened perfection, when ordered they husk it for you, dip it in melted butter, then hand it over to you to season it as you wish. I love me some corn and my, oh my, oh my was that good. We ended our night eating out at Rocky Rococo. It took me three meals to eat their spaghetti and meatballs. Three. Meals.

Day two – we found out there were complimentary bikes.

We made a day of bike riding. And let me tell you, we aren’t bike riders. We don’t own bikes. But, we were given a map of downtown, we wanted to see the falls, wanted a glimpse of the arena we’d enjoy the concert at, and we wanted to do an activity together. On a bike seat that would comfortably cushion my bum we set off. 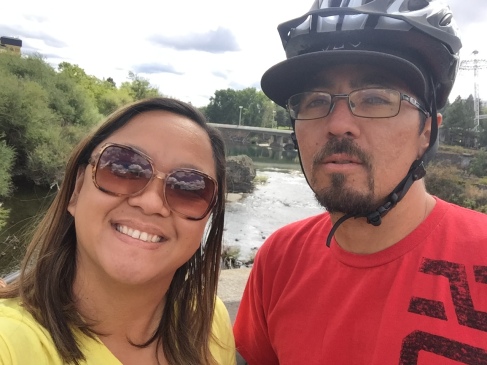 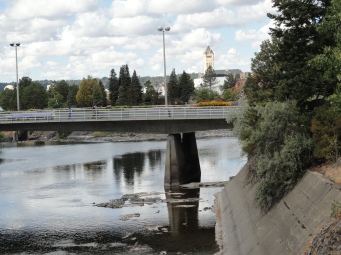 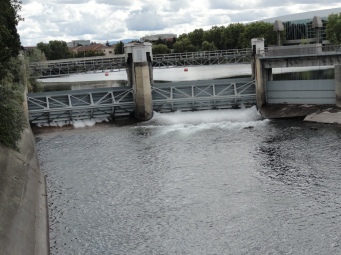 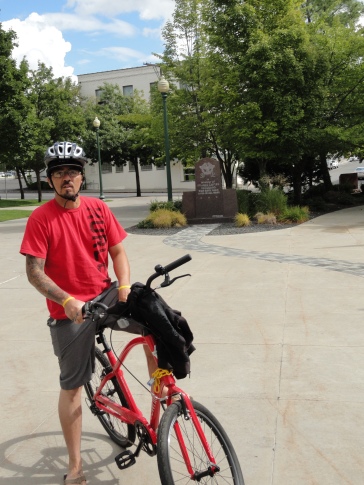 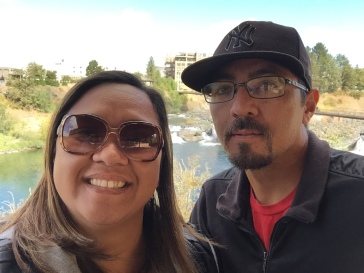 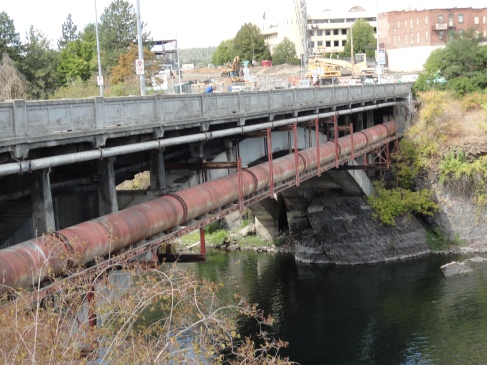 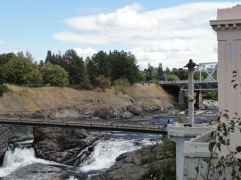 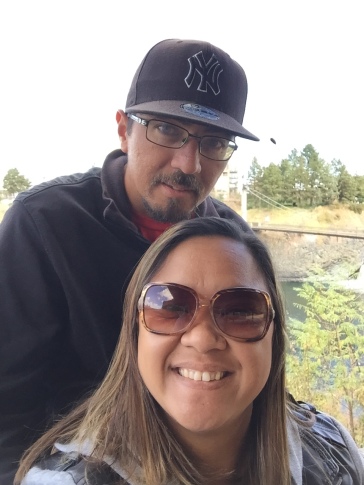 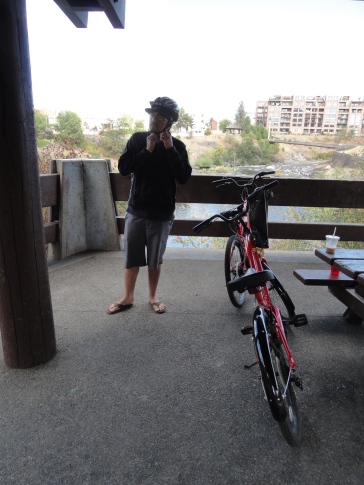 The bike rental was pretty much a first. The town is still small enough that we were able to see so much of the main attractions that day thanks to our trusted two wheelers. I realized then that the bike rides shouldn’t be the only thing I conquer. I told myself I would conquer my fears this weekend, I would continue with firsts, I would get to go home and say I did it. We bought day passes that would allow us to enjoy everything that was going on at Riverfront Park. The day passes included unlimited amusement rides, mini golf, movies and a lift ride.

I rode the Spokane Falls Skyride. Me. Scaredy cat of heights. Got into a metal box of death. Hanging, suspended in the air by just a single cable. Feeling every ounce of movement. Stranded in the sky as high as maybe 60 feet above the falls. Bracing, prepared when I fall to my death with a gust of wind. All the fears and anxiety that comes with being suspended in the air couldn’t beat me. Because, I did it. Without a panic attack. I controlled my breathing. And enjoyed the ride with my husband.

Of course we went back to the fest because we actually had to eat. Day one was only a walk around to see what was there. Day two was when I got to sink my fangs into buttery corn. Another success story? The fest was jam packed. On top of being deathly afraid of heights I am also deathly afraid of being around a large group of people. It couldn’t get any larger than a food fest where people walked in lines trying to get through. People so close brushing up against my arm. People so close I could feel their breath on mine. People so close I could smell the shampoo on their hair. I took a hold of my husband’s hand and ventured into the throngs of people. I did it. After a few hours at the fest I couldn’t control my breathing anymore so he took me out of the humanized stampede and headed back towards the hotel to nap and recharge. I did it.

I love books. I have a growing library at home. I have stacks of books that sit on my desk because I have no place to put them. Growing. And to find a new and used book store walking distance from the hotel put me in a fine frenzy. As an aspiring writer books seize my heart. The words float off the pages bringing with it stories of enchantment, magic, love, laughter, heartache, horror, crime, mystery, adventures. When I read I am entranced being brought into a new world so you can only imagine where I was when I took a step into that store. I could smell books as I walked in. The smell of the pages being read by hundreds of people, telling me the stories of where each book has been. Nothing is more calming then the smell of book pages. I was in heaven. I also took heaven with me in a big blue bag.

Nap time took us through about 630p. Hubby was hungry and days ago I had promised if he could find me an Aztec restaurant I’d eat Mexican food with him. I’m not a Mexican food eating person. But, I knew it would make him happy to say I’d go once we saw Aztec was a 15 minute walk from the hotel. I did it. I ate Mexican food. And no one can celebrate my success better than a Mexican restaurant serving me tequila like this…

The day that brought us to Spokane had arrived. Day three.

We woke up to go on another bike ride. We headed to Frank’s Diner in hopes of some good grub. Apparently so did everyone else in the town. Frank’s isn’t very big. It looks like it was a train car that was remanufactured to become a sitting diner. We could see people standing waiting for a table inside. We could also see a line of people outside as well. Hard passed on that and chose Jenny’s Diner across the way for the best hash browns in town. So they claim, I didn’t try them.

We rounded our bike ride with Boo Radley’s and Spokandy. Both shops were amazing. Candy and fun. You can’t beat that.

Then the concert. Go here if you want to read about the concert. I am a ginormous fan of Carrie Underwood and this post is already long so the gushing had to be separated. Y’all will understand once you read it. So, go read it!

I was ready to go home. I accomplished what I went there for: get out of my comfort zone, spend time with my amazing husband, and sleep. Of course we had to eat first. If you’re ever in Spokane y’all need to try The Yards. Go early or wait long. They had some amazing homemade corn beef hash. And I’m telling you, with an over easy egg over them they are to die for. To. Die. For.

We got home safely after detouring for bathroom breaks and leg stretches, a picnic in the park, driver switching and three brush fires. The best part? Being united with my fur babies.

I’m sure y’all didn’t want to know everything that happened on my trip. Well some of y’all did. Family especially and this was easier than telling them all one by one. So thanks to the general population. Besides one day I’d like to share this experience with my kids, share with them that fears can be conquered. So I had to put it in writing because I have one of the worst memories ever. But, also because I wanted to encourage y’all  and to let you know that the only thing stopping you is fear. I promise you it’ll be alright. If I can get through a massive anxiety attack at a concert filled with a boat load of people you my friend will get through it. Remember: Everything you want is on the other side of fear.

I believe in you. xoxo