I have been following Carrie Underwood since the day she told Simon Cowell he was scary. There was something about that voice that drew me in. I watched her wow her way through the judges and American Idol Season 4. She was the first person I ever voted for and I was watching the show since Kelly Clarkson became the first ever winner.

While in Spokane we got to attend her Storyteller Tour. The stage was different then the ones we’ve seen before. She didn’t dare with the odds of gravity and fly through the air with a truck or a ranch like corral. Instead she surrounded the stage with her fans and performed like never before. She had The Swon Brothers and Easton Corbin open up for her. They were great performers as well. But, the air became electrifying when we knew it was show time. 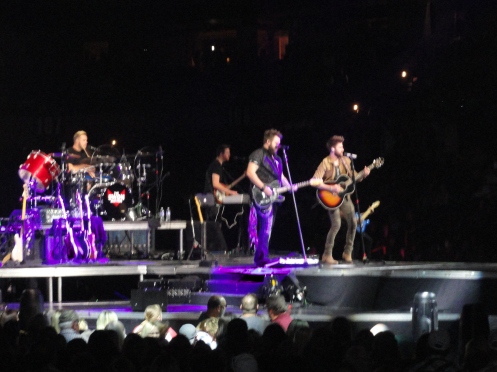 Easton Corbin rocking out with his band

Serenading with some love

Carrie did it all with a mash up like arrangement of some of her hits (think Something’ Bad and Last Name), played the harmonica while belting out her tunes, sat on the piano and adorably sang to her husband and son, and played her guitar. The best parts: she played my favorite revenge songs of Before He Cheats and Undo It, she sang about her faith in complete and honest humbleness, enjoyed the Carrie Cam with her fans, took a selfie, and was utterly amazing.

Here is the reason. I admire her.

She came from a one stop light town that no one knew about until Season 4 of American Idol. She became a huge celebrity winning the show and she chooses to donate proceeds from ticket sales to charity. She isn’t afraid to add her faith to her CDs (Jesus Take the Wheel, So Small, Temporary Home, Who Are You, Something In The Water). And while I may not personally know her now or before she become Carrie Underwood the entertainer she doesn’t seem to have strayed from her home values and down to earth personality.

I know she is just a person like the rest of us. But, she is a person with the means and options to make a difference in this world. She wants to end slavery, help educate children with music, supports veterans, takes a stand against cancer. She is using the platform she has been given to use her voice. Make a difference. Make a change.

Every day we come across people like that. People who actively seek to make the world a better place with one kind gesture, one kind act, one kind smile. Carrie, like other celebrities, choose to do good, choose to be the best versions of themselves to take a stand. That in my book is a definition of an everyday hero. People like her that we can be inspired by, people like her who force us to play on, people like her who teach us that publicly having faith in God isn’t a bad thing.

She wasn’t the cornerstone of making me choose to better my life and the lives around me. But, she helped as the world watched her grow from a shy timid girl to an entertainer using her God given talents to bring change.

As my vacation winds down, the high of being in Spokane to be a part of that concert, there is nothing more clearer than the fact that I want to bring on change. I don’t know how. Maybe it is in my writing projects. Maybe it is in being behind the scenes at work. Maybe it is being a part of mPact Girls. Whatever it is, I hope that I can inspire someone out there. Maybe I won’t be known as a hero, a role model, someone to look up to. But, maybe, just maybe, I can be the light for someone who stood in the dark far too long.

One thought on “The Storyteller Tour”