When I was younger living in Hawaii I evoked my creative need to be in the kitchen. It wasn’t because my dad was a chef or a baker. It wasn’t because my family liked to eat. It was because one day my elementary school was having some sort of book clearance. They didn’t want books, perhaps making room for new books. In the pile of unwanted books was an orange/rust burnt covered book of ambrosial recipes. And in that cookbook was a cake called Lightning Cake.

That magical cookbook grew up with me. I even brought it to Boise when my husband and I decided to make a change. It followed me back to Hawaii when we moved back for a bit before finally settling in the Pacific Northwest. Unfortunately between Hawaii and Portland it vanished. I’ve been searching for that Lightning Cake recipe for years. I’ve found other recipe imposters but have not found the original love of my life. And so, I seek its replacement.

Really, what I seek is cake. Yesterday I wanted cake. Hard. I even tried to coax people from my office to brave the elements of what is said to be the worst storm since 1962 to hit the PNW to buy me some cake. No bribe, however, was large enough for them to do so. And so, on my way home, craving the moistness of Lightning Cake, I decided to find a yellow cake recipe I was satisfied with and a tasty Buttercream Nutella to complement its delicious goodness. And so, my Kitchen Nightmares journey for the week began.

The original cake recipe I pretty much followed. The only difference is for both the vanilla and the vegetable oil I didn’t measure. I eyed the measurements which in a way was great because the cake was absolutely amazingly moist. I’ll probably never be able to recreate it, but hopefully, my need for food won’t continue to be so extreme.

It was the first cake ever that I made that was pretty level. I’ve made all sorts of cakes and I usually have to level the top out in order for it to be presentable. This time it was pretty level – or I wasn’t worried and I just wanted me some cake. That is entirely possible.

Anyway, I mixed all the ingredients and then hid in the corner of my kitchen enjoying the batter. I probably shouldn’t have done that but I wanted cake. I figure, a little cake – even if it wasn’t cooked – could hold me over until the cake was actually done. 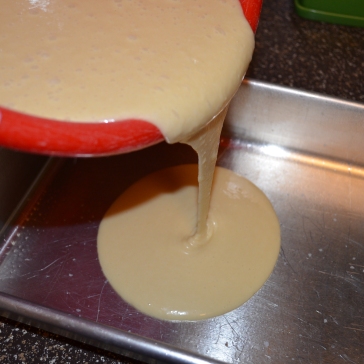 I changed the frosting up some. I added a skoshy bit more vanilla. If you haven’t noticed by now, I love me my vanilla. I also didn’t add the amount of sugar as in the regular recipe because I don’t need to go into a diabetic coma. The 2 1/2 cups were plenty sweet and the consistency was good enough for me. The frosting came out perfect and I had immediately began to think what I can eat with it:

I think I’ve found my personal dipping sauce. This shouldn’t surprise me though since I’ve become addicted to Nutella. 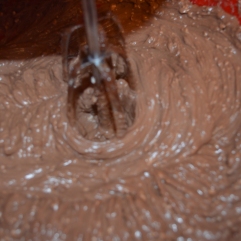 I made the frosting after about 10 minutes from the time I took the cake out. I was in a hurry to have some cake. I wasn’t joking when I told you the craving was rough. I probably should have waited a bit longer because when I frosted the cake the frosting melted some. It didn’t help I grabbed the plate from my dishwasher. My plate ended up looking like this… 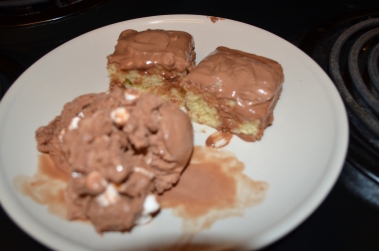 But, it turned out amazing.

Usually I like really light and fluffy cake. This cake is a little denser but oh my lanta moist. I was actually nervous this recipe was going to fail. Mainly because I had no patience and I was hungry. But, it turned out pretty phenomenal. It makes it even more perfect with the worst storm in 50 years currently hitting the PNW. Now, I can camp out in peace with a plate of cake satisfying my sweet tooth listening to the pounding rain and the angry wind.

Enjoy. I’m heading back to snuggling, being subdued and watching Netflix. xoxo

Place softened butter into large mixing bowl and mix on medium for 1-2 minutes. Place dry ingredients into bowl and combine with butter for 30 seconds. Add milk, oil, vanilla and eggs and mix on medium-high for one minute.

Directions:
In a large bowl beat softened blocks of butter with hand mixer on medium speed until creamy. Add cream cheese, Nutella and vanilla; beat until mixed well with butter. Gradually increase mixer speed to high and continue beating until light and fluffy.

Slowly beat cocoa and 2½ cups powdered sugar into mix until well combined. You can continue to add powdered sugar until desired consistency and sweetness is reached. Beat on high about 1 to 2 minutes or until combined and smooth.
Immediately frost cake.